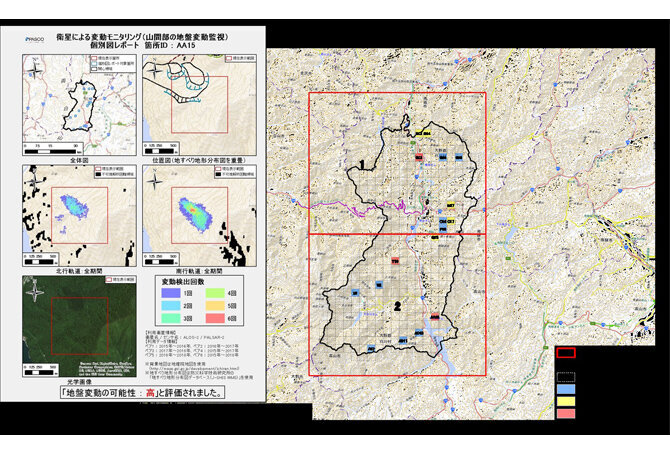 This is a service that uses satellite data to capture changes that are signs of sediment-related disasters (landslides) and indicate locations where there is a possibility of a disaster.
In mountainous areas, it is possible to observe dangerous areas that have not been confirmed by field surveys and deformed areas that have not yet been identified in a wide area and in a plane.

Mountains and hills occupy about 70%

Points to use ALOS

DAICHI-2 (ALOS-2) can be detected as fluctuating fringes if it fluctuates by about 2 cm or more during the observation period, and is observed regularly (about four times a year). Therefore, you can continuously check the fluctuation status from those images.

It is possible to grasp a wide area such as a basin in a plane, and it is possible to narrow down the target of detailed investigation (corresponding with the conventional method focusing on the narrowed down part), which leads to cost reduction. In addition, places that were previously difficult to enter are also covered.

The service uses satellite images to capture slight ground movements and provides reports on ground movements that are signs of landslides. By using the satellite image analysis method, it is possible to collect surface change information without going to the site. Since satellite data collects information extensively and roughly, it can be used for general inspections and forecasts such as basic surveys. In addition, it will be used according to the conventional method, and has the following merits.

Prior confirmation by "preliminary evaluation" before contract